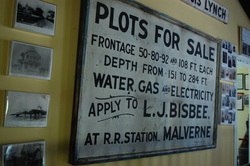 The Society’s main purposes are to obtain, organize, preserve, display, and make available to the public, all historical information and artifacts pertaining to Malverne and surrounding areas. In addition, the Society endeavors to preserve, whenever possible, older structures and landmarks within the membership perimeters, and to promote the identity of Malverne as a community.